On Sunday, November 29, 2015, Kevin Engel shared his giving testimony with Church of the Resurrection. Now a member of Resurrection's Vestry, Kevin shared his journey and hopes for this new initiative.

When we were first visiting Resurrection in 2011, Jan and I could tell that we were coming into a church that had been on a long journey; the announcements and conversations sometimes referred to the ups and downs and faith-stretching times of the past. So we weren't surprised that within a few months, the leadership started talking about a new vision for the future. It was part of a new Generosity Initiative called REACH.

In the past, I may have been less excited to come to a new church and immediately hear teaching about giving and generosity. It could be a reason to take a pass. But at Rez, there seemed to be something different happening. God was clearly at work! People had grown much through the journey of the past, and we didn't want to be left out. No, this wasn't a time for us to sit on the sidelines. Even though we were newer to the church, we wanted to know that when the generosity results were announced, that we were a part of this journey along with everyone else. So as newcomers, we made a two-year giving commitment and are so glad we did.

That two years of stretched giving turned out to be a faith-building time for us as we watched God provide in ways we never would have dreamed possible. We were honored to be a part of that church-wide spiritual journey.

So with Moved by Jesus, we took a step once again to give in stretching ways—giving not only from monthly income, but also from stored assets. It will be fun to watch God work again to both lead and provide for us!

The following letter was released to the Anglican Church of North America from Archbishop Foley Beach.

Grace and peace to you in the incredible Name of our Messiah and Lord, Jesus Christ!!


As most of you know, I have been invited to attend a gathering called by the Archbishop of Canterbury next week in Canterbury, England. The reasons he has not been able to call a meeting of the Primates of the Communion until this time is because the actions of The Episcopal Church and the Anglican Church of Canada have deeply torn the fabric of trust and fellowship in the Communion. In 2007 the Primates met in Dar es Salaam and unanimously agreed on a course of action to restore the godly fellowship of the Communion by asking these two provinces to repent and return to the Biblical teaching and practice of the Anglican Communion. When they did not repent, the previous Archbishop of Canterbury acted against the consensus of the Primates and ignored the consequences which were imposed. This has made the breach even wider.

Since that time, the Global Anglican Future Conference (GAFCON) has met in Jerusalem (2008) and in Nairobi (2013), and through GAFCON, the Anglican Church in North America was birthed in 2009. Since that time our Province in North America has been recognized and is in full communion with the provinces represented by GAFCON and the Global South of the Anglican Communion. These provinces represent the vast majority of the Anglicans in the world and have been our partners in spreading the Good News of Jesus Christ and discipling people in Anglican Christianity.

I have been asked many times why I am going. Firstly, as a group the GAFCON Primates all decided together that we would attend in good faith and see if there is a possibility of restoring order to the structures of the Anglican Communion.

Secondly, the Archbishop of Canterbury, Justin Welby, invited me in good faith, and like my brother Primates, I am going in good faith.

Thirdly, the Anglican Church in North America is now a Partner Province of the Global South who are also planning to attend.

Fourthly, to not attempt to bring godly order and unity to the Church would be a sin against the Lord and His bride.

I am writing to ask for your prayers, even fasting, as the Lord leads you. I travel to the UK this weekend for the meetings which begin on Monday morning at Canterbury Cathedral. I see no easy answers without repentance and Gospel Truth. Pray for wisdom. Pray for confidence in the Truth of God. Pray for boldness. Pray for humility. Pray for repentance. Pray for healing. What is at stake? It is really not about me or about the Anglican Church in North America. It is the reputation of Jesus Christ. It is the souls of millions of people who are being taught a false Gospel and are being led into spiritual and sexual bondage under the pretense of the Christian Faith. It is about the third largest expression of the Christian Faith being able to unite and bring Christian hope and godliness in the face of violent opposition all around the globe.

Personally, I believe this will be an extremely challenging meeting for all involved, but I believe in a big and powerful God!!

Thank you in advance for your prayers.

"Now to Him who is able to do far more abundantly than we can ask or think, according to the power at work within us, to him be glory in the church and in Christ Jesus throughout all generations" (Ephesians 3:20f, ESV).

Your brother in Christ, 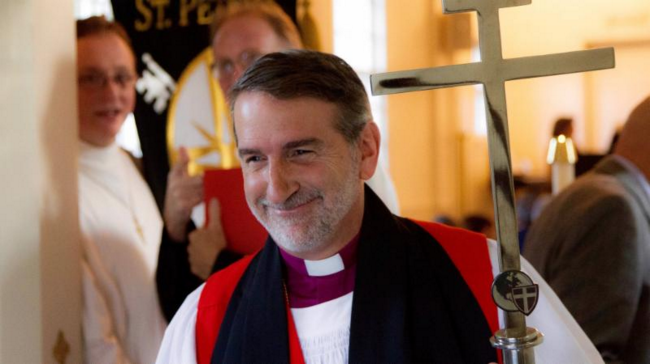